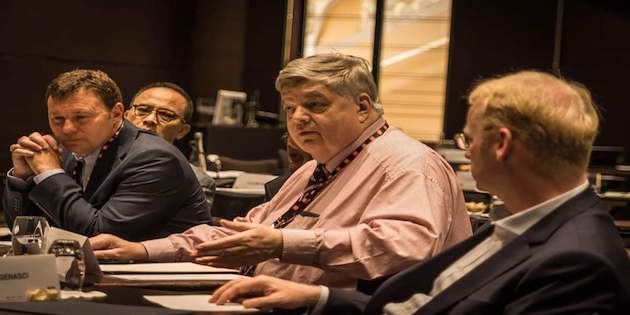 I have just returned from FECIF’s 20th Anniversary Conference in Brussels. FECIF is the European Adviser and Intermediaries Association and Libertatem has been a member since we first opened our doors for business.

These events tend to run in two strands. The good stuff invariably comes in the breakout, coffee and meal sessions. Here, we can all work out what each country’s regulator is up to, the development of local markets and products as well as see the direction their pension reforms are going.  These are often bi-partisan meetings.

For example, we and the Swiss are close. Both because of our nations’ key roles in financial services but also because both of our countries are currently on the receiving end of some wholesale bullying by the EU.

Because of the market share UK advisers have always enjoyed, allied to the fact we are much further down the road of regulation than any other EU country, the UK is regarded as a market leader at these events.

The comedy is often provided by the conference sessions. Last year, we had a German MEP who was clearly going for the “Smuggest Man in the World” award (presumably against John Bercow). He gleefully informed us that he and his chums would reverse Brexit. I can report that this was put to the sword on that day with EU Advisers seeing the Single Market as a con – which, when it comes to Financial Services, the majority of us feel it is.

Not only is there not a Single Market across the EU, we soon learnt that there isn’t even a single market between Austria and its neighbours Slovenia and Slovakia, despite all of them having a similar legal system thanks to the Austro-Hungarian empire. Technically, an adviser cannot service clients who move across the border which can, as often happens in these countries, be just the other side of the road.

The only way there could be an EU FS single market is for the EU to be one country, with one Chancellor, one taxation regime administered by one government, operating within just one legal system.  And no one except the Commission gives that a chance. But that doesn’t stop Commission staff dreaming.

This year’s comedy cabaret was provided by a lady from the EU Commission who presented her idea for an EU wide Pension Plan, so she can maintain the fantasy of a Single Market (stay with me on this, it’s brilliant).  She wants to create a pension plan for all, but this can only be manufactured by Europe’s larger investment firms. No little firms allowed here.

It must offer a wide spread of investments, including property, all for a 1% charge cap. It is Stakeholder, but with a strong whiff of garlic. She had to admit that there weren’t currently any firms eager to take up this challenge at the moment, but she is still living in hope.

This work of genius is only improved with the question of currency. The investments, of course, would be operated using the Euro. So, all those EU citizens not in the Euro will face currency arbitrage.  Brilliant!

So, to recap, the EU want to introduce a pension plan that no one wants to manufacture, held in a currency that many EU citizens are not paid in.

But wait – there’s more. The Q&A session resulted in some quick-fire questions with some revealing answers:

What tax regime would apply to this EU Pension? Don’t know.
Is this extra to any state’s pension regime or part of it? You will have to ask the state.
Who is regulating this plan? I will have to get back to you.
Any advice needed? What do you think?
What is the legal system?  Not decided yet.
Does this help those workers who move around Europe?  No! - for the reasons outlined above.

By this point, the members in the room were beginning to doubt their sanity. Had we passed into an alternative universe? Was there a door in the back of that wardrobe?  Have the lunatics finally taken over the asylum?

I thought I might nip outside and feed the lady’s unicorns but instead I asked the question which was hanging heavily across the room.

Madam: Who is going to buy this product? Err... No one.

So, there we have it. A product invented by regulators which is the cure for a non-existent disease. All fine and dandy if the EU was a single country, but currently it is just a waste of breath and an exercise in putting everybody into one, small box.

You can also see here the problem with all pension policy. It is designed by those who already have gilt edged Government or company pension schemes. This Commission Lady doesn’t even pay anything for her very generous pension which will see her retire with little or no financial concerns when she is finally put out to pasture.

The last three days have also reminded me of the real reason for our existence. To give the majority of the public, who are not blessed by employment by the state, an independent and dignified future. Advisers are a massive force for good and we should stop the self-flagellation and point that out to every client.

Advisers are now the only people speaking for SME’s and the self employed and we must continue to do so, however much regulators attempt to price us out of that market. Advisers are even more important to less developed countries and I received some interesting news on this front last week.

Whilst FECIF deals with all advisers in the mostly a developed FS European market, there is a worldwide sister group attached to UN called CIFA. Their interest is more often developing countries which grow their economies by deploying small companies, who in turn have a greater need for financial advice.

When we published The Heath Report 2 (THR2) in 2012, CIFA promoted it across the world. It is even in the Library of the United Nations!

And now CIFA want to do the same for THR3. They have offered us a speaking place at the G77 conference at UN HQ in New York in April 2020. As THR3 will be over one year old by then, we intend issuing an upated version, THR3.1, which will include new stats from 2019.

But the fact remains our profession is overseen by people who have little or no concept of how it actually works.  And we are the ones left picking up the pieces when it all goes wrong.  We are not consulted.  Instead, we are turned into scapegoats.  As your trade association it is up to us to change that mentality and point out the facts when fiction will clearly not work.  You can help us achieve that, by joining us at Libertatem from as little as £20 per month.