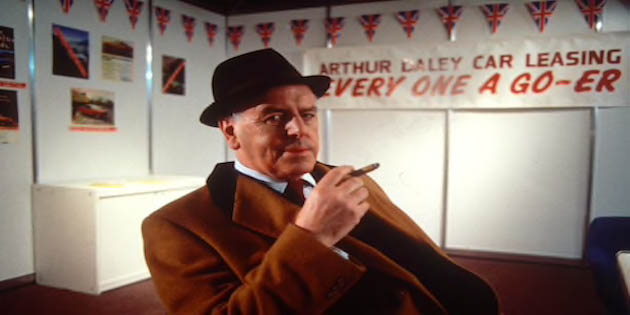 "You make contact with your customer. Understand their needs. And then flog them something they could well do without.”

This appears to be the ‘outcomes view’ of the FCA on car sales and finance and as a result new and used car dealers commission is about to come under the FCA spotlight.

Has the FCA watched too many Minder episodes? Car finance is set to undergo a regulatory kicking of the tyres, a look under the bonnet because, would you believe it, the FCA revealed that it had uncovered unfair practices among some retailers and brokers in the way they make “commission” on sales.

It’s that dirty word again, commissions. The FCA is about to embark on a consultation to justify their unintended, but oh so foreseen by others, outcome and is set to kill off car buying for the ‘ordinary guy in the street by protecting buyers from themselves.

There may be a lot to criticise those ‘Daley- esc’ car dealers, especially those old school ‘bombsite’ traders offering ‘a nice little smoker,’ you know, the one careful lady owner, never crashed, written off, raced or rallied, full manufacturer service history deals and a year’s MOT.

But to just pick out commission in what is a very complicated, sometimes risky to the trade and buyer alike, process of car sales as being the root of consumer detriment shows a staggering disregard for consumer benefit being traded against consumer detriment.

People buy cars, not finance, it is not an advised purchase or sale, or was not until the FCA decided to open-up another regulatory opportunity. Everything to do with car purchase prices, finance or sale values whether new or ‘pre-owned is almost impossible to understand yet car finance forms a very important part of the pricing structure allowing dealers to make a margin whether they are manufacturer main dealers or not. Car finance and buying is the sum of a great number of parts.

The finance is secured, most times, on the vehicle, a highly moveable security. The buyer may not have a good credit history and loans can and indeed are priced according to risk.

That vehicle should be insured (another regulated sidebar and taxed) it should be MOT’d if over 3 years old. To drive it you need fuel (taxed) a licence, drive it badly and you could lose that licence.

Once you have the car, if it is a lemon your stuck with it. If finance is part of the deal, you have a cooling off period with a lot of small print that may prove hard to unravel.

Any car you buy instantly depreciates, a new one by the VAT element alone the minute you drive out of the showroom.

With all this legal and regulatory stuff already going on, to apply FCA regulation to just one part of the process will create a waterbed effect that will just result in consumer detriment.

The FCA reckon that “By banning this type of commission, we believe we will see increased competition in the market which will ultimately save customers money."

Like everything else regulated, consumers are not always better off, they become part of that waterbed effect.

For those unfamiliar with the Waterbed effect, it is the natural but not necessarily intended potential to squeeze one part of a complicated and complex regulated business model (and the attendant regulatory processes) to cause a serious bulge elsewhere in the process.

That bulge is normally only uncomfortable for the consumer it was designed to protect.

It is also another chance to throw some golden opportunities to CMC’c now that the PPI door has slammed shut.

The FCA say they will consult on the proposed new rules until 15 January 2020 before implementing them at some point during the year.

What this means, for those in the car industry unfamiliar with the workings of the FCA, is that these rules are already drafted and in place to go after very few respondents will have shown interest in responding because, rather like those in the advisory sector, they see little point.

Why, because car sales are linked to finance. Rather like house buying. Gone are the days you ‘paid cash’, perhaps money laundering put an end to that, it is all about debt, depreciation, balloon payments and tax all contributing to the sales process

And like any business that relies on finance options the deal is the sum of the parts and having an a la cart ‘pop’ at one element……commission, is simply madness.

Here are various examples of car finance and incentives

Manufacturer new car finance either by hire purchase or PCP- personal contract purchase (where you buy the car with a small deposit and after say 3 years you can hand the car back or buy it outright or part exchange in return for another purchase.

A typical rate for a new Mercedes, with finance supported by the manufacture, could be 4.9% but the rate is conditional on taking that finance. Other incentives could be dealer contributions toward a deposit

PCH is personal contract hire, you pay a very low, often manufacturer supported monthly amount, for the use of a new car. You in effect hire it and at the end of the agreement you hand it back. Commissions are much easier to identify and could be up to £1000 plus any make on the car margin. The actual price of the car is another thing entirely, affected by other factors as depreciation up front and VAT reclaims.

Alongside these deals a buyer may be tempted with tactical campaigns where there is manufacturer support to switch brands, so say BMW to Mercedes, that is called conquest money.

Pre-registration is another method of getting car sales complete. Good deals for the manufacturer but not the dealership as these do not count against quarterly targets

Offers are also available for loyalty but not so common.

“Preventing the use of this type of commission would remove the financial incentive for brokers to increase the interest rate that a customer pays and give lenders more control over the prices customers pay for their motor finance, Christopher Woolard, Executive Director of Strategy and Competition at the FCA, said.

There are many things that could be done to protect the vulnerable car buyer, regulating commission is not one of them.

Nucleus: Is your firm ready for the SM&CR?