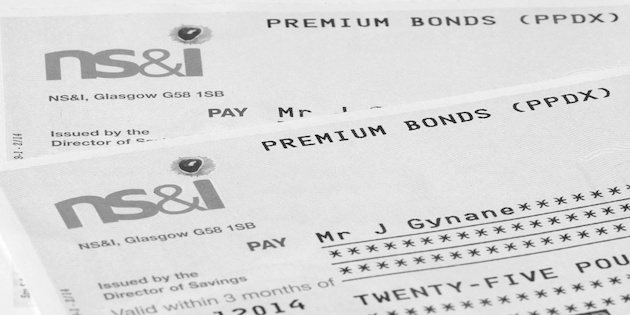 1 April celerbrate nother Premium Bonds milestone as it has been 25 years since the £1 million jackpot prize was introduced.

In that time, our Agents Million have been making their monthly journeys far and wide, battling against all manner of weather conditions, struggling to find houses hidden away, and even ending up in Europe, to ensure that winners of the £1 million jackpot prize can be told face-to-face of their exciting windfall.

NS&I's Agents Million have fond memories of their visits to jackpot winners, and with each reaction being unique, they know that their task is just as exciting as the first time they delivered the prize.

No matter where they have travelled, or who has received the prize, one anecdote is constant: Agent Million always turns up at just the right time in a Premium Bonds holders’ life. From retirement plans to buying their own home, the £1 million jackpot makes a huge difference. And it's not always the original winner who benefits from ERNIE's random number generation, with one winner deciding to split the winnings between their grandchildren instead.

On the 25th anniversary of the introduction of the £1 million jackpot, our Agents Million will be making Premium Bonds’ 407th and 408th millionaires. April’s jackpot winners include a trip to Warwickshire - the first time since November 2015 - while also making a familiar journey to Kent, having last visited in December 2018.

The stories behind the windfalls

Each £1 million delivery creates new memories and stories. Most jackpot winners are completely taken aback from their surprise visit from Agent Million.

One Premium Bonds millionaire will testify to this having been dragged out of bed on New Year’s Day to receive the news, while another burst into tears at the realisation of finally being able to complete a dream of relocating closer to family.

However to some, it is intuition. One winner bumped into Agent Million on their driveway uttering the words “don’t tell me I’ve won the £1 million?!”

The Agents have had to be creative when giving the news over the years. From sheltering under hanging baskets in the rain, to telling a reluctant customer the good news through an open window, it has all been worth it in the end with reactions ranging from disbelief to hysteria. It’s all in a day’s work for Agent Million.

While Agents Million visit the two jackpot winners each month, there are still over 3 million tax-free prizes to be won in each prize draw.

Each one of the these prizes paid out each month - besides the jackpot - ranging from £25 to £100,000 can be sent directly to the customer's bank account, or reinvested on the customer’s instructions. Having prizes paid in this way can avoid prizes going unclaimed in the future.

There are over 1.5 million unclaimed Premium Bonds prizes, worth £61 million. In Warwickshire, there are more than 10,000 prizes to the value of £384,575 that remain unclaimed. The figures are slightly higher in Kent, with over 40,000 unclaimed prizes worth more than £1.5 million.

How to find out if you are a winner in April’s draw?

Customers now have more ways than ever before to check if they have won a prize in this month’s draw, the past six months of draws or if they have any unclaimed prizes. NS&I have recently launched the official NS&I Premium Bonds prize checker Alexa skill which will let you check for good news using voice-enabled technology. This is one of the first retail banking voice applications to the UK market.

Other options to check prizes, include the prize checker on nsandi.com or by downloading the official Premium Bonds prize checker app from the Apple App store or Google Play. Customers will need to know their holders’ number in order to access.

Jill Waters, NS&I Retail Director, said: “After the recent launch of ERNIE 5 and the Alexa prize checking skill, Premium Bonds has hit another important milestone in its long and rich history.

“Making 408 millionaires to date is no mean feat and our Agents Million have been there every step of the way, surprising, delighting and reassuring all of our customers who have been lucky enough to join this exclusive jackpot winning group.

“I’m sure that this month’s winners would have been happy to forgo an extra hour in bed with news on their fabulous win and that many memories can be created as a result of them saving in Premium Bonds.”

Read more NS&I articles and find out more about their Tools & Resources here..

Rathbones In the KNOW blog: Escaping the ivory towers